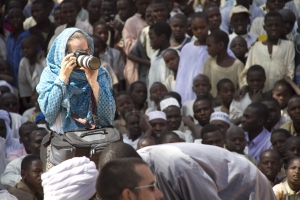 A looming global economic crisis caused by COVID-19 promises a likely outcome of reduced giving to missional causes. Traditional missions agencies face difficult choices: what is truly essential, what staff and pursuits are integral, and what activities need to be outsourced or discontinued. In the face of an uncertain financial future, agencies may be tempted to out-market one another in a scramble for the pieces of the funding pie that remain.

For decades, missions communications teams have engaged in journalism—telling the story of missions—as well as creating and distributing marketing materials and messages, like brochures and content for Facebook. Today, the place of marketing within these teams crowds out journalism. Staff that created once-prolific missions publications have been repurposed solely toward marketing. Short, second-hand information followed by predictable calls to action that are guaranteed to reel in donations, have replaced well- reported stories. The resulting missions stories going out to the worldwide Church from across missions agencies have become anaemic and story-telling is on life support.

The pressures of COVID-19 could finish this shift. They threaten to put all remaining vestiges of missions journalism in the grave, giving us only remnants of stories about what God is doing, today, wrapped in the cellophane packaging of a sales pitch. In this scenario, missionaries called to communicate the story of God would be deemed irrelevant and non-essential by their agencies. Why carry staff when you could outsource to a marketing agency instead? Marketing may yield quick wins, but the long-term negative impact is telling. The Church is already tuning out with missions perceived to be just one more marketing pitch.

But what if COVID-19 presents another option—space to radically rethink the place of communications within missions? What if mission communicators are seen within a missiological framework that reverses their roles’ reduction, expands them beyond marketing and broadens the scope to God’s mission rather than only one missions agency? What if they are unleashed to inspire rather than sell? From this perspective, missions communicators could alternatively be seen as Church historians, educators and practical missiologists.

From Genesis to Revelation, God’s mission is recorded for us by known and unknown authors, many of whom wrote story-based history. Documenting what God was doing was so critical that both Jews and Christians compiled extensive books—our Old and New Testament Scriptures. Muhammad later described followers of these two faiths as “people of the book.” [1], [2]

These holy Scriptures capture the diligent work of scribes, prophets, kings and then later the disciples and followers of Jesus. In the first four verses of Luke’s gospel, he describes his work as that of a journalist— researching, interviewing eyewitnesses and writing an orderly account. In Acts, he continues the story of the Church. After the writing of Scriptures was completed, early Church historians like Eusebius of Caesarea (260- 340 AD) picked up the mantle of recording God’s movements through Church and human history as they saw it unfold before them.

History shapes our current context. Through it we see patterns that lay bare the otherwise hidden roots of beliefs, culture and thought as well as God’s unseen or unnoticed action. Missions agencies sit on a mountain of narrative data which reveals God at work, today.

This information would transform our understanding of how God is moving now, especially when fitted into the broader, continuous narrative of God. Missionary communicators with journalism training are perfectly fit to gather these stories through an agency lens.

However, when mission storytelling is reduced merely to marketing, this story is lost. What Eusebius discovered on his quest to record Church history then, remains true now. In his book, Ecclesiastical History, he wrote, “I feel inadequate to do it [Church history] justice as the first to venture on such an undertaking, a traveler on a lonely and untrodden path…. But… I have not found even the footprints of any predecessors on this path, only traces in which some have left various accounts of the times in which they lived.” [3]

Imagine the traces left of today’s missions stories if they were only contained in fragments of fundraising appeal letters! Alternatively, if we were to view missions communicators as participants in a collective of Church historians, their work would become powerfully motivated by discovering the divine imprint during our time and in our place in God’s epic.

“But the church doesn’t understand,” some missions agency staff complain as they decry the lack of missions knowledge within local churches. Sometimes this pushes agencies away from Church engagement because it feels too fraught with difficulties.

However, this neglects a key responsibility that mission agencies must carry—educating the Church about God’s movements in today’s world. Quality instruction in God’s mission and our missions response must precede invitations for involvement. This builds a foundation for future positive responses. Marketing does not focus here, but rather the ‘selling’ of involvement.

Furthermore, presenting facts and statistics can either overwhelm those not regularly exposed to missions data or provoke confirmation bias—an automatic resistance to information that doesn’t fit pre-existing beliefs. [4]

How do we get around this? Commit time, money and staff to reporting stories. Then share those stories far and wide. Well-crafted true stories provide a powerful means of changing minds and hearts. They immerse people into another environment without requiring those who hear, watch or read them to leave their current context.
Science backs this up. Researchers Uri Hasson, Greg Stephens and Lauren Silbert used MRI technology to study the brains of people engaged with stories. They found that the brains of speakers and listeners actually mirror one another. They couple. [5] Mind melds are real! Stories engage us so powerfully that our whole brain activates. This tills the ground for transformation.

Missions agencies encourage their staff members to share personal stories with their supporters. While this is good, it’s not enough. Missionary communicators with journalism training are equipped to create and share a wide range of stories with skill, intention, as well as appropriate ethics, maximizing their effectiveness with the largest number of people.

When we think of missionary communicators as educators, we release them to consider all that is happening in and through the missions experience. Then as they discover evidence of God’s work and glory, they release it to others through stories they develop— educating the Church and inviting their involvement in missions.

Ed Stetzer, Executive Director of the Billy Graham Center at Wheaton College, describes missiology as an interdisciplinary study that incorporates theology, anthropology and ecclesiology. He says as a missiologist he often talks to churches about “their need to join God on His mission…” and understand how “…to be a faithful presence in this broken world.” He goes on to say missiologists, “…humbly stand as a prophetic voice to the Church, calling her to remain biblically faithful, culturally sensitive, and missionally focused.” [6]

Wouldn’t it be wonderful if every church could receive the teaching of a missiologist? Maybe they can. Missionary communicators serving with missions agencies quietly shape the message the global Church receives about God’s mission in every publication, website, video, and piece of social media content they produce. Online content alone typically reaches thousands.

When stories are created within a missiological framework, the Church can reimagine its place in God’s mission. Core missiological principles penetrate deep through the vicarious immersion that stories offer. To do this, missionary communicators need time to study what God is doing through missions. Through careful observation and personal experience, they become missions-oriented reflective practitioners who then interpret and share what they’ve learned through stories that welcome engagement from a broader audience.

Marketing, on its own, is too limited to offer the same benefit. A slogan is an inadequate prophetic voice. Stories show missiology in its application. They fuel a reflective process built on taking people, through narrative, into what God is actually doing.

Developing these stories requires time, study and immersive experience—resources few mission communicators are given. However, when they receive them, missionary communicators can engage in their call to be practical missiologists who impart a new vision to the Church in which they can participate.

In July 2020, EMQ (Evangelical Missions Quarterly) published an article on this same topic, written by a former colleague and me called Redeeming Journalism [7]. A missionary communicator serving in Europe wrote to us in response. She said the leadership of her organisation provided little support for her as a storyteller because they didn’t understand her calling or role in missions. As a result of this misunderstanding, she also felt missionaries were reluctant to collaborate with her in sharing their stories.

Her story is painfully familiar. I and many other missionary communicators can relate. We are an unseen force which remains largely unrecognized, misunderstood and undervalued. This must stop. The glory of God’s mission must be known so that the Church does not remain in ignorance. Every follower of Jesus needs the chance to hear the Holy Spirit’s invitation to partake in this mission.

Missions agencies can play a part in breaking the silence when they provide adequate staff, time and funding so their missions communicators can do more than marketing. Journalism—developing and sharing thoughtful, ethical and well researched stories—must take priority. This guarantees that missionary communicators can meet the requirements of their holistic calling, their essential services, as historians, educators and practical missiologists for the global Church. And it promises a lasting return on investment, through deep missional engagement, that secures the Church’s long-term engagement in God’s mission and perhaps even safeguards a mission’s future within it. Quick marketing sales never deliver that.

COVID-19 doesn’t need to be a death-knell for mission journalism. It can be its resurrection.